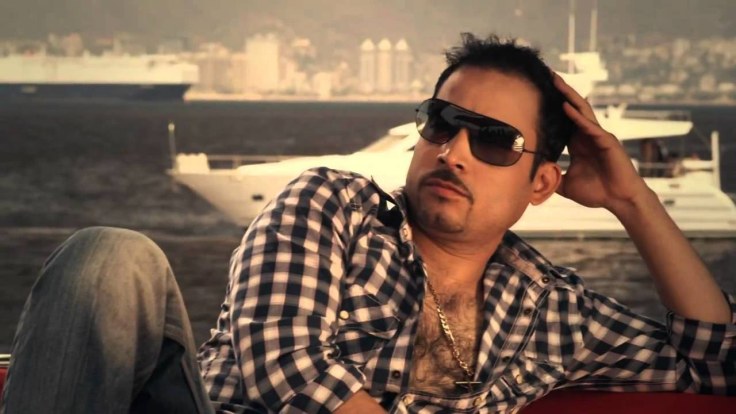 Say what you will about the new Calibre 50 ballad — and no, I cannot prove that some nefarious Disa executive forced them to play the song while submerged in gelatin, although the first time I watched the video I thought the music had been screwed and chopped — but at least it knocked their previous ballad “Contigo” off the chart. (Don’t worry, “Contigo” is still huge in El Norte.) In fact all the new Mexican radio hits this fortnight are ballads, which makes Picking to Click a more difficult proposition than usual. But NorteñoBlog is not completely devoid of romance! NorteñoBlog knows the desires that wrack the heart! And you know who else knows how to rip out his heart for all to see? German Montero, that’s who! So give a listen to “Me Seguirás Buscando,” where Montero promises to keep searching… and searching… to provide you with complete satisfaction. Judging by his overwrought performance, the search might entail self-strangulation and vocal nodes, but if that´s what it takes…

In El Norte chart news, El Komander goes top 10 Hot Latin for the third time with “Malditas Ganas.” Billboard also reports that his ballad “El Papel Cambio,” which we encountered on the Mexican charts earlier this year, is lurking down in the U.S. 40s. The U.S. seems to lag a few months behind Mexico in our love for El Komander songs. NorteñoBlog has no ready explanation for this, since it´s certainly not true of every artist — see both countries´ immediate embrace of Recodo´s “Mi Vicio Mas Grande.” Komander does seem to do better with streaming than he does with radio play, so maybe his more ramshackle sound is a tougher sell for U.S. radio programmers?

And since you were wondering, Gerardo Ortiz´s not-at-all-ramshackle new album Hoy Mas Fuerte is doing very well, thank you. It sold 20,000 in its first week, his best week ever, enough to get it up to number 24 on the overall Billboard 200 and an easy number one on the Latin Albums chart. This is Ortiz´s sixth number one album this decade, a record on the Latin Albums chart. The first single, corrido “El Cholo,” is also charting in El Norte, though you´ll notice it´s nowhere to be found on the Mexican radio chart below. Interesante. In possibly related news, NorteñoBlog´s librarian Gloria, who goes to lots of norteño shows in the city, hasn´t heard Fuerte yet and doesn´t like Ortiz because he´s “too popular.” She´s a Komander fan.

These are the Top 20 “Popular” songs in Mexico, as measured by monitorLATINO. Don’t confuse “Popular” with the “General” list, which contains many of the same songs but also “Uptown Funk!”, “See You Again,” “Love Me Like You Do,” and a snappy song about Paulina Rubio’s new vice, which I’m gonna guess is either A Dude or The Charlie Charlie Challenge.