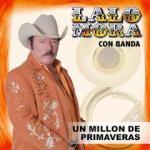 This week in the “norteño legend covers the Great Ranchera Songbook” department, we find Lalo Mora, formerly of the ’70s duo Lalo y Lupe and the ’80s band Los Invasores de Nuevo León. Mora’s been making solo music on labels big and small for a while now, and on his latest, Un Millón de Primaveras (Mora), he’s hired a banda to help him dig through some classics. The horn charts are decent and Mora’s grizzled voice settles into the tunes with effortless authority, but you’ve probably heard these songs done better elsewhere. NorteñoBlog directs you to Joan Sebastian‘s country-with-horns take on the title track, which he wrote; and to Vicente Fernández‘s trembling and magisterial version of “El Ultimo en la Fila,” which Sebastian also wrote. Lest you think the entire Great Ranchera Songbook sprang from Joan Sebastian’s tear-stained pen, Mora also sings “Cartas Marcadas” and some other decidedly non-Sebastian tunes. The album’s technically accomplished, but I never need to hear it again: NO VALE LA PENA. 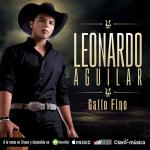 Leonardo Aguilar has lucked into some decidedly less accomplished banda charts on his debut album Gallo Fino (Machin) — if you wanna hear clarinets cloy hard, check out this single from a couple years ago. No matter: I like Aguilar’s album better than Lalo Mora’s. For one thing, it’s only half banda; the other half features a tight tuba-bottomed norteño band jerking its way through sprightly polkas like “Lupita.” For another thing, Aguilar’s husky voice reminds me a lot of Lyle Lovett, at least the Lovett who commits to his material and doesn’t wink his way through it. Aguilar also sings a bit like his dad, ranchera-pop star Pepe Aguilar, but Leonardo’s sound on the title track and others is all his own. Gallo Fino is leaning toward VALE LA PENA territory because you need to hear this guy. His taste in banda arrangements is bound to improve with time, right?

(Because you know you need it, here’s the three Aguilar children singing “The Star-Spangled Banner” to President Obama. That little one’s a pistol!) 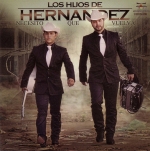 No such caveats necessary for Los Hijos de Hernández, a five-piece tuba-bottomed band from Culiacán who’ve released several albums of corridos and other stuff since 2011. Their best album title came early: 38 Súper Scareface. (Booga booga.) Their latest release, Necesito Que Vuelva (Sol Musical), appears to have come even earlier; the principles of Youtube detection tell me it’s a re-release of a 2011 album. Though it mixes in romantic songs like the title track and syncopated basslines verging on rock, the album’s calling cards are its big lurching corridos, where singers Germán and Tomas Hernández trade off lines with abandon, while Victor García builds spiky barbed wire walls around them with his tuba parts. Check out Pick to Click “El Mini Lic,” a tribute to the Sinaloa Cartel’s Dámaso López Núñez, Jr., released a year before Gerardo Ortiz hit with “Dámaso,” the decade’s greatest single and thus the definitive corrido about the same guy. Los Hijos’ take on the subject still rocks, though, and the whole album is VALE LA PENA.