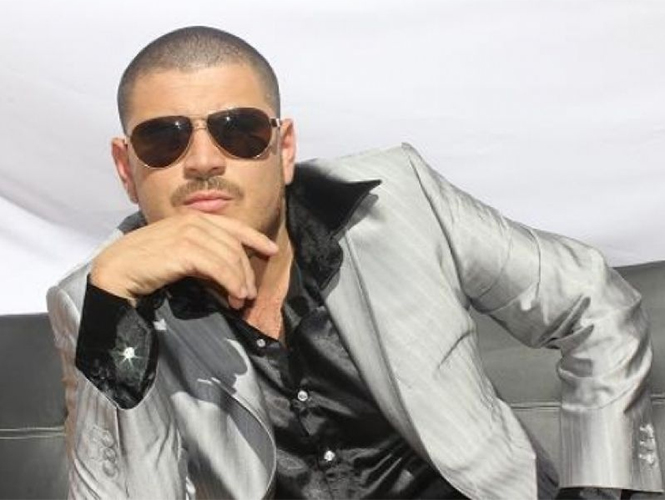 El Komander – Cazador (Twiins Music Group)
I’ve got some catching up to do with Alfredo Rios, whose single “Soy De Rancho” and at-least-fourth album Cazador are among the best of 2014. With his aviator shades, fealty to country living, and endorsement of la mota, Rios could almost be Eric Church, if Church had Brantley Gilbert’s vocal range and described gangland killings in gory detail. (Please note: my translation studies don’t yet reveal whether Rios’s latest traffics in the gore. Back in 2011 he was the focal point of one of those “explain corrido violence to gringos” articles. I found it helpful, anyway.) The music on Cazador is wonderfully loose and shaggy norteño, its nonstop guitars frequently augmented by a banda that sounds like it’ll fly apart any second. Overall, the music’s as obnoxious as the tuba fart that punctuates Rios’s voice the first time he sings “Sí Señor, yo soy de rancho.” Despite having about eight notes at his disposal, Rios has charisma to burn; he only fools himself into trying to sing pretty once, on the mariachi ballad “Descansa Mi Amor,” where his ideal of love is a whispering frog.
VALE LA PENA

Rios also appears on Calibre 50’s excellent “Qué Tiene De Malo,” a hit in México but not (so far) the U.S. We covered it over at The Singles Jukebox, where I said:

The artists are indignant. Both Calibre 50, a quartet named for a big-ass gun, and El Komander, who’s designed his “K” to look like a big-ass gun, have recently been fined and banned by certain state and local governments in Mexico. The reason? Their narcocorrido music “promotes violence.” Well, yeah. Wasn’t that the point of all the big-ass guns? The artists retaliate with this pro-freedom meta-corrido, “What’s Wrong With That?”, presenting themselves as working stiffs who’ll drink and party and spend hard-earned money on whatever kind of music they like. (They’re like two steps removed from Toby Keith in “That Don’t Make Me a Bad Guy.”) On their albums, Calibre venture into pop ballads and dangerously close to sea shanties; despite the broadest reach of any norteño band, their grasp sounds firmest when they return to corridos. That lurching waltz beat could trace the arc of a razor sharp pendulum, the tuba fluttering and blatting just out of its reach. During the spoken interlude they quote Komander’s 2012 Youtube hit “Cuernito Armani,” named for — you guessed it — a big-ass gun.
VALE LA PENA

Los Amos – 2014 (Michoacan Records)
Los Creadores del Corrido Hyphy return, and they are… not so hyphy. Not that “hyphy” was ever a guarantee of quality in the norteño field (watch for my hyphy norteño thinkpiece, coming soon to this blog, only four years past its sell-by date!), but in 2014 they’ve amped up the outside songwriters, the ballad count, and the amount of reverb on José Guajardo’s voice. When José lays on some thick accordion, they can be lively and raucous; but more often they sound like old pros politely trying to recapture the raucity of youth. They’re most energized by the songs of Marco Montana, who evidently knows a thing or two about chinga-ing your madre.
NO VALE LA PENA

Banda Tierra Sagrada – Así Te Quiero Yo (Remex)
Despite the minor key tunes “La Loca” and “Máxima Potencia” — have these guys been reading my email’s spam folder? — they never approach the desmadre of their most recent hit. The three different singers are modestly compelling, even if nobody sings as well as duet partner Marco Flores, but the band doesn’t offer much beyond one big brassy idea per song. Ballads like “Lucharé Por Ti” don’t even get that far.
NO VALE LA PENA