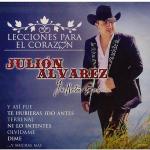 Billboard tells us Julión Álvarez — the man with the continent’s best voice and the proud Instructor De Amor behind a brand new greatest hits compilation, Lecciones Para El Corazón (Disa) — was Spotify’s most streamed artist in Mexico this past year. As two more jewels in his gilded professorial crown, Lecciones and El Aferrado (Fonovisa) were the most streamed albums in Mexico, followed by albums from the Weeknd, Major Lazer, and — look at that! — Natalia LaFourcade, whose Hasta La Raíz NorteñoBlog called “fun in an arty go-go boots way.” (Maybe I should listen to it again.) (And stop using clothes metaphors.)

(Incidentally, the most interesting of the Mexican Spotify’s top 5 lists is the one for “mujeres más escuchadas”: Ariana Grande, LaFourcade, Ha*Ash, Shakira, and Katy Perry. It’s also the list I would have guessed the fewest entries on. Except “viral songs,” that list is weird. Anyway, I hereby resolve to listen to more Ha*Ash in the new year.)

Álvarez, an enormously talented singer and bandleader who made 2014’s best album, returned this year with so-so results on his very own White Album. By the standards of most shiny banda-pop, El Aferrado is still pretty good — it’s got memorable tunes, it doesn’t lean too heavily on ballads, and it features Álvarez’s trademark scratchy quaver. But I’ve got one major quarrel. Someone, whether prolific engineer Ramón Sánchez or producer Álvarez himself, has toned down that distinctive quaver to the point where it’s unrecognizable in places. (Listen to “Mis Travesuras” and try picking its vocalist out of a banda lineup.) Still, the versatile singer excels at both ballads and the big dumb cumbia “El Tomasín”, and the accordion-into-brass clamor of the title song is thrilling.

Banda Cuisillos is an odd band that pays homage to the Mayans in their name and the Apaches in their dress code; their album covers look like The Neverending Story’s Luck Dragon puked up calendar art. They’re hippies, in other words, but their single “Cerveza” (Musart/Balboa) is a conventional, if delightful, take on the universal epidemic of Beer Goggles. It’s got everything you love in a banda single: two vocalists trying to outsing one another, brass alternating with guitar, and deplorable sexism. Although, using the Ellen Willis test, “Cerveza” still isn’t as deplorably sexist as “Wild World” by that hippie Cat Stevens.