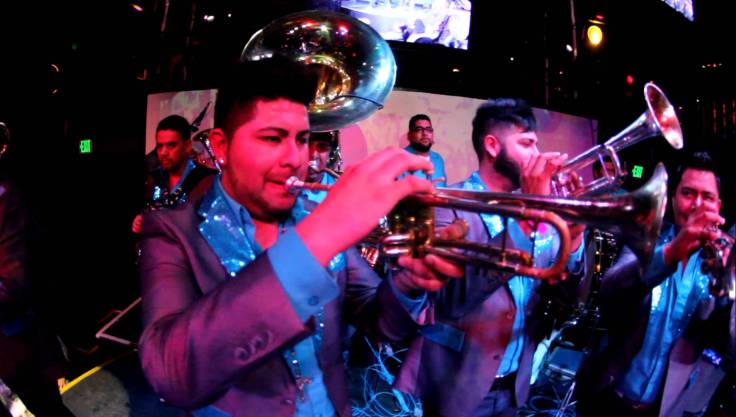 It is the longstanding position of NorteñoBlog that the puro sax styles of Chihuahua and Zacatecas would improve with the addition of more terrible “sax” puns in the titles. Nestled in the middle of Billboard‘s Latin Albums chart is the newest album from La Energia Norteña, El Rompecabezas (Azteca) (alternate title: Dolor de Cabeza Saxual), a dance saxtet from Dallas, Texas. Puzzlingly, La Energia doesn’t have ties to one of the usual sax hotbeds; rather, they’re originally from the central Mexican state of San Luis Potosí, also home to singer Ana Bárbara and Mount Wirikuta. (The latter is sacred to a group of indigenous Mexican people and currently under threat of rape by a Canadian silver mining company.) El Rompecabezas is energetic and poppy and I had to double check the first two songs to make sure they weren’t exactly the same. One of them was “Malditos Sentimientos” (alternate title: “Sentimientos, Saxo, y MALDICIóN”).

Since we’re checking in with Azteca Records, the asaxual Banda la Chacaloza de Jeréz Zacatecas has released the spritely new single “La Serenaca.” As you know from NorteñoBlog’s infatuation with Marco A. Flores and his #1 Banda Jeréz, Zacatecan banda has a reputation for being more party-hearty than its Sinaloan counterpart: i.e., fewer slow songs and crasser lyrics. “La Serenaca” bears this out: it’s a pushy pickup monologue, delivered twice to a cute little muñequita over a pounding brass waltz. Chacaloza are cheerful rapscallions. Last year they released the album/mission statement Alegres y Pisteadoras, which featured their earlier single “I Don’t Give a Fuck”. Besides the prurient thrill NorteñoBlog gets from cusswords, “Fuck” is musically impressive: instruments keep popping in to deliver wild fills, and the singers slide along intriguingly behind the beat. Pick to Click, and if you don’t like it, you know what? For sure:

Giving decidedly more fucks is septuagenarian Vicente Fernández, whose Muriendo de Amor (Sony) becomes his sixth number one on Billboard‘s Top Latin Albums chart, albeit with only a thousand sold. He’s sounding muted in his eighth decade, but Fernández is still a master of pacing and delineating complex emotions at a microscopic level. Check out the fast-slow ranchera drama of “La Maldición del Poeta” to hear the master paired with masterful material.