When we last met the rambunctious corrido quintet Grupo Fernández last June, NorteñoBlog was praising their Regulo Caro and Ariel Camacho feature “La Fuga Del Dorian,” a real barnburner of a corrido. In fact the charisma of the two stars overshadowed Los Fernández themselves, kind of like Nicki and Weezy guesting on a Tyga song, or Jagger and Hendrix sitting in with a slaphappy but faceless British garage band. The band’s runaway rhythm section regularly achieves that sublime rolling feel you find in many of the best new corrido bands, but it’s hard to buy lead singer Elton Aispuro unless he’s singing high and fast. When they attempt a slow song like Camacho’s “Te Metiste,” rhythm and singer sound like they’re wearing lead boots. Unfortunately their new album Las Pacas (DEL) has too many slow ones — actually, too many songs period. 17! Who do these guys think they are, Revolver Cannabis? But they still know how to burn down the barn — witness this week’s Pick to Click “El Pariente De La O,” featuring the high, Keith Richards-worthy backing vocals of bajo sexto player Juan García:

Fernández’s album ends with a spritely ode to their label boss Angel Del Villar. Between that and Los Plebes’ “DEL Negociante” climbing the Hot Latin chart — #20 last week — it seems a good time to catch up with all the DEL Records albums I slept on last fall. Because I’m slightly afraid of them I’ll start with the aforementioned Revolver Cannabis, the tuba quartet who wrote “DEL Negociante” and included the song on their refreshingly short EP Los Amos del Terror. The awesome album cover combines the thrill of Robert Duvall’s scene in Apocalypse Now with the pathos of a pissed-off Disney animator wearing a Cannibal Corpse t-shirt. I want to sketch it on my notebook during chemistry class.

Marketed by DEL as a “cult classic” before it had sold squat, Regulo Caro’s Mi Guitarra y Yo Vol. 2 is a sequel to his 2014 album entitled — you guessed it — Mi Pelo Es Bastante. (Look it up!) Caro plays Mexican norteño classix with a second guitarist and a tubist, the nuevo Sierreño style of Ariel Camacho and El Canelo before him. This might be a lovely gift for the obsessive Regulo Caro fan in your life. (Maybe for El Día del Jefes?) But Caro’s at his best when he’s singing his own wicked character studies and giving himself over to nastiness. Genuflecting to the songbook of legends, he just sounds stiff. Plus, Sierreño trios tend to live and die by their lead guitar fireworks, and Caro doesn’t have the chops to deliver.
NO VALE LA PENA

The drumless quartet or quintet Traviezoz de la Zierra have a new 19-song album called Los Dias de Ayer. 19 songs! Who do they think they are — Banda el Recodo? The album’s mostly a sleepy affair, although they did include a well-deserved batch of insults for future U.S. president Donald Trump, “Mejor Jodido,” that I hereby vow to blast from my car if our fair nation elects that asshole. 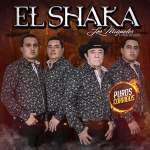 But the best DEL album I heard today was a different drum-free Sierreño collection by Los Migueles “La Voz Original.” Miguel Ángel Angulo Bojórquez, of Miguel y Miguel fame, has released a couple albums now with some young guitarists and a bassist, and their new one El Shaka is terrific from top to bottom. It’s a loose, lived-in collection of corridos, some new and some familiar, including the aforementioned “La Fuga Del Dorian,” plus “El Hijo del Ingeniero” and an “El Karma” that’s the closest anyone has come to replicating Camacho’s definitive version. The singing commands the songs without sounding showy. The lead requinto is showy but with an endless supply of licks and fills. I could happily nod along to the bass and rhythm guitar grooves all day long. This album is as consistent as any I’ve heard, so I wouldn’t say any song stands out, but their cover of Los Nuevos Rebeldes’ “El Tipo Tren” is typically VALE LA PENA:

If Angel Del Villar’s releasing albums this good, I guess he deserves to have people writing songs about him.