A Guide to Regional Mexican Radio in Houston

With the Houston Livestock Show and Rodeo coming up March 1-20, including Go Tejano Day on March 13, I figured I should try to understand the complicated Regional Mexican radio scene in the 6th biggest U.S. radio market.

Look, I made a chart! Stations are listed across the top — frequency, station nickname, rating for the 4th quarter of 2015 — with the most recent call sign associated with that frequency just below, in the 2016 row. The chart begins with 1986 at the bottom; as you travel up through the years, you can see when new call signs take over specific frequencies.

OCTOBER 5, 1989: GERARDO ORTIZ IS BORN (That’s just for reference, and because this .jpg was hard to format.)

When NorteñoBlog surveyed Chicago´s Regional Mexican radio scene last year, it was a straightforward project — I traced the timelines of the three major stations in our market. Not so in Houston. As you can see from the above chart, Houston’s Mexican music fans have enjoyed an abundance of choices over the past three decades. They’ve also endured a confusing tangle of buyouts, simulcasts, and call signs changing frequencies, along with the national boom and bust of a vital regional style: Tejano.

Today non-Texans might have trouble understanding Tejano’s importance to the Lone Star State. After all, Chicago didn’t get our first all-Mexican station until 1997 — the same year KXTJ became Houston’s first station with a norteño focus — by which time Tejano was quickly losing spins to norteño on U.S. radio. In the previous decade, Tejano hadn’t merely been an important regional style; it had been central to Hispanic radio listeners across El Norte, and central to the identities of millions of Texas Latinos. The tragedy of Selena’s death in 1995 was a harbinger and probably a cause for a wider sense of loss — the loss of Tejano identity resonating with a broader populace. As we’ve seen from the outcry when the Houston Rodeo schedules norteño bands on its popular “Go Tejano Day,” Tejano music is more than a nationwide fad that dried up. It’s not duranguense. Tejano identity is a powerful and distinct thing, with music as one of its main expressions, and for a brief period of about a decade that musical identity was crucial to America’s understanding of Latinos.

And then all of a sudden it was replaced by a bunch of damn corridos and tubas. You can understand why Tejano fans’ nostalgia would take on a new intensity.

But that oversimplifies the matter. Let’s look at some of the chart’s high points. As you do, keep in mind that I’ve never been to Houston and I probably got some things wrong, so I’ll welcome your comments and corrections. END_OF_DOCUMENT_TOKEN_TO_BE_REPLACED 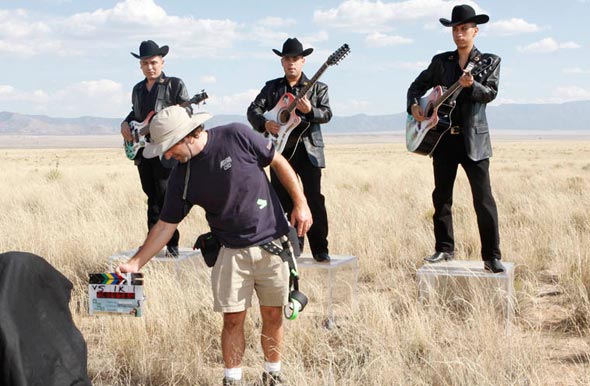 Inspired by one of top commenter Manuel’s karaoke jams, here’s a short history of Breaking Bad‘s favorite corridistas, the band Allmusic calls “as gritty and dramatic as one of their songs”: LOS CUATES DE SINALOA. But first, the karaoke jam in question, 2010´s “El Alamo,” a jaunty and repetitive take on a little three-note motive.

1998: Two 14-year-old guitar-playing cousins from Sinaloa, Nano y Gabriel Berrelleza, cross the border from Mexico into Arizona. After living homeless and busking for a couple months, one day they show up at a Phoenix nightclub owned by musician José Juan Segura. Segura tells Billboard,

END_OF_DOCUMENT_TOKEN_TO_BE_REPLACED

These were the top Regional Mexican songs of July 25, 1998, as reported by Billboard. Some things to note:

If I ever again start talking about banda and norteño groups using pop chord changes like it’s a recent thing, please shoot me. Maybe just in the leg. I’ll take the hint.

On the other hand (he whispers, writhing in pain), something happened between 1998 and now. Listen to the songs by Graciela Beltrán (#5) and Banda Maguey (#3). Beltrán is straight up pop with mariachi horns; the predominant sounds are guitars strumming and playing dry little MOR licks. (The song’s parent album was arranged by Joan Sebastian (#12), who Allmusic thinks is a woman, but I’ll cut ’em slack because STE’s a better critic than I am.) Banda Maguey’s song has something like a banda horn arrangement chugging alongside synths and a rhythm section. These are first and foremost pop songs, the way we think of pop songs in the U.S.; the ensembles get some of their POP by incorporating elements of traditional Mexican styles.

Today’s banda pop flips the equation: the ensembles are first and foremost acoustic, Cornelio Reyna-style big bands, only instead of playing the traditional ranchera repertoire they play pop songs by new songwriters, using up-to-date lyrical imagery. The commutative property of banda pop tells us we still get banda pop, but the results sound, improbably, more immediate and less dated. Whoever’s responsible for the past decade or so of banda hipness — maybe thank Alfonso Lizárraga, the arranger for Banda El Recodo? (further research) — realized something important. Banda arrangements can contain as many hooks, can deliver pop songs as sparkly and indelible, as rock bands, synths, or turntables and microphones. The Sinaloan brass band is a terrific vehicle for delivering pop tunes, and maybe because it’s so well established, it paradoxically doesn’t sound like it belongs back in some different era. Kind of like a blues-rock quartet.

6. “Yo Nací Para Amarte” – Alejandro Fernández
This swarthy ballad was #1 on the Hot Latin chart this week, and was therefore written about here by Jonathan Bogart.

10. “Me Haces Falta Tu” – Los Angeles Azules
El Patrón 95.5 still plays this song on a semi-regular basis. I think I’ve heard the antiphony between accordion and trombones, deliberate to the point of creepiness, as part of cumbia mixes or even as interstitial music, coming out of breaks. Once you hear it you don’t forget it.

15. “Me Voy A Quitar De En Medio” – Vicente Fernández
Traditional mariachi from a master — listen to the way he slides into the ends of his phrases. The video’s simplicity is startling. Fernández rides his horse to the misión and sits there singing his song while a woman opens the doors. Then he stops singing and rides away, and she closes the doors.