Regional Mexican music had as good a year in 2015 as any other style of popular music, but you wouldn’t know it from any music magazine’s year-end coverage. This Mexican-American radio format is only one small musical laboratory within the vast complex of U.S. pop; but figured by their percentages, norteño, banda, cumbia, and Tejano bands released as many great, vibrant singles and albums as their peers in other popular music subgenres. Yet good luck finding this music on year-end lists. Even at Billboard, which provides the best English-language coverage of Mexican music, the list of Top 10 Latin Albums contains only one (very good) regional Mexican album, which came out in 2014. None of the magazine’s Top 10 Latin Songs represent Mexican regional styles. (Shoutout to the New York Times’ Ben Ratliff, though, for getting Remmy Valenzuela’s “¿Por Qué Me Ilusionaste?” into the paper of record.) And never mind year-end coverage — this fun, fascinating music rarely gets covered throughout the year in mainstream publications, although NPR and Annie Correal in the Times are notable exceptions. As is The Singles Jukebox, where Josh writes and where the editors and writers share an expansive definition of “pop.”

This is pop music, dammit! MILLIONS OF AMERICANS LISTEN TO IT.

(An appropriate YouTube playlist to accompany that claim.) END_OF_DOCUMENT_TOKEN_TO_BE_REPLACED

Extollers of Mexico’s indigenous Huichol people and composers of relentless electrocumbias, the members of Banda Cohuich inhabit the liminal nexus of old and new. I mean who doesn’t? But I’m guessing Cohuich limns the nexus a bit more loudly than do you and I. Their single “Son Kora Kau Te Te Kai Nie Ni (Dialecto Huichol)” is a blaring ringwalk of a Huichol anthem, and most of the songs on their entertaining compilation No Te Equivoques (Pegasus) follow suit. One exception: the unapologetically goofy “Cumbia de Voz”, a low key groover that’s acapella except for a synth beat, with the band singing the part of falsetto trumpets.

NorteñoBlog doesn’t always Pick to Click, but when I do… sometimes I get it wrong and type “Click to Pick.” This made searching for the previous year’s worth of Picks INTERESANTE.

The Pick to Click began as a shameless ripoff from Charles Pierce’s must-read liberal politics blog at Esquire, as did a couple other, possibly subtler NorteñoBlog tics. (Spot them all! Both! Whatever!) It’s a useful way to highlight the song I enjoy the most in a particular post, so that you the loyal reader don’t have to wade through a pool of Banda MS’s tears to reach the good stuff. Of course, if you enjoy the delectable bouquet wafting from Banda MS’s tears, you can always Click what I don’t Pick, though you’ll run the risk of turning Banda MS happy and then they might run out of Art. Besides current singles, the following list includes some older singles and current album tracks.

Most Picked at three apiece: NorteñoBlog’s probable artists of the year Alfredo Ríos “El Komander” and Marco Flores y #1 Banda Jerez. Banda Cuisillos, Noel Torres, and Chuy Lizárraga each scored two Picks. So did Los Gfez, Pancho Uresti, and Ariel Camacho, though one Pick from each of those three was in a “featured” role. Besides norteño and banda, the list includes cumbias and puro sax stomps, reggaeton and ABBA-schlager, Jenny and the Mexicats and Pitbull, and covers of Johnny Cash and — first up — Shania Twain. Happy Clicking!
END_OF_DOCUMENT_TOKEN_TO_BE_REPLACED

This quarter’s list contains fewer radio hits than last quarter’s — only four out of 11 — but don’t worry! Both radio and Youtube continue to inundate us with all kinds of great music under the banner of “regional Mexican.” Below we’ve got cumbia from the underrepresented state of Nayarit, violin-driven dance music from the underrepresented state of Oaxaca, a brass banda from Jalisco who dresses in indigenous garb and doesn’t play corridos but sometimes plays piano pop, Linda Ronstadt-style pop country from Nuevo León, Chicago’s hometown heroines Los Horóscopos hitting Mexican radio and giving everybody cuernos, aaaaand (as usual) a whole lotta Sinaloa. NorteñoBlog has apparently been sleeping on the states of Chihuahua and Zacatecas, though, as I’ve dug up zero hot new singles to represent their puro sax styles. Better luck next quarter!

2. Laura Denisse – “Sigo Enamorada” (Fonovisa)
Denisse has a big clear voice in the vein of Linda Ronstadt, and she’s been singing a mix of banda and pop since she was a kid in the ’90s. The big brass riff here is simply a series of repeated notes, but the players articulate and syncopate like swaggering jazz cowboys.
hasn’t charted

4. Grupo El Reto ft. Alta Consigna – “La Parranda Va a Empezar” (Gerencia 360/Sony)
This quartet belongs to la corriente escuela of corridistas who sing about corruption while their corrosive tubists imitate machine gun fire. Corre! The quartet Alta Consigna also has a tuba in the band, so you’ve got two tubists and a requinto (I think?) playing furiously over everything.
hasn’t charted

5. Banda Cuisillos – “Cerveza” (Musart/Balboa)
This isn’t even my favorite Cuisillos song of 2015 — that’d be this swinging piano-driven non-single — but these Jaliscanos do indulge several of NorteñoBlog’s weaknesses: two different singers trying to outdo one another in the passion department, brass alternating with guitar, and deplorable sexism.
Mexican radio hit

6. Leandro Ríos ft. Pancho Uresti – “Debajo Del Sombrero” (Remex)
This not-so-humble ranchera ballad takes as much pleasure in the act of rhyming as any random song by Sondheim. Although, going through my Spanish rudiments, I’m disappointed the song doesn’t take place in enero, and why doesn’t our heroic caballero own a perro?
U.S. and Mexican radio hit

9. Los Gfez – “Hasta Tu Dedo Gordito” (Remex)
I implore you not to google images of dedos gorditos unless you get off on toe injuries. No judging. I should mention that the quartet Los Gfez, last seen joining Diego Herrera on a likable Mexican hit, start their search for the mystery dedo fast and, through the magic of time changes, find a way to get faster.
hasn’t charted 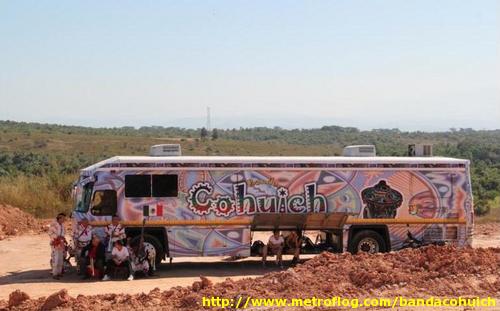 For corrido bands, “El Karma” is quickly becoming what “Louie Louie” was to ’60s garage rockers or “I’m Not Your Stepping Stone” was to D.C. hardcore bands: the song you play to prove your mettle and/or prove you’re metal. This was true even before Ariel Camacho’s death propelled the song to mythic status and #1 on the Hot Latin chart earlier this year. Last year Camacho, Noel Torres ft. Voz De Mando, Revolver Cannabis, and two of this week’s bands all recorded versions of the song, and last week the Ivan Archivaldo impersonators in Grupo Maximo Grado released their own take. “El Karma” has several things to recommend it to aspiring nihilists. Its story and takeaway lesson are badass; its minor-key B section sets it apart from the corrido pack; and it works as well with rowdy bandas as it does with unsmiling small ensembles. Nadie de la parca se puede escapar — so we might as well dance, right? 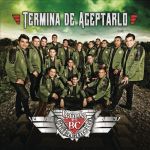 The 17 or so members of Banda Culiacancito were last seen cutting a live album of duets with the norteño band Revolver Cannabis and the late corridista Ariel Camacho, and their version of “El Karma” is a muy borracho thing, far removed from Camacho’s stolid solo rendition. Their new album Termina de Aceptario (DEL/Sony) returns to just Culiacancito and their horns, with a rollicking single called “Lastima de Tu Cuerpo.”

Last year La Séptima Banda cut their own version of “El Karma,” a cover of competing borrachera and verve. They titled their whole album after the song, in fact — El Karma: Puros Corridos (Hyphy). Their major label debut Segurito Segurito (Fonovisa) is out this week, and it’s already yielded one minor radio hit with the big, bouncy “Bonito y Bello.” “B’y’B” is NOT puro corrido; its swanky melody reminds me Adriel Favela’s “Cómo Olvidarla,” which in turn reminded me of Tower of Power or something, but maybe you should check for yourself. 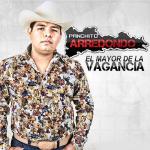 Panchito Arredondo does not, to my knowledge, have a cover of “El Karma” floating around, but I’ll tell you what is floating around: the guy’s sense of pitch. His second album Mayor de la Vagancia (Hyphy) should be required listening for aspiring TV singing contestants; in places it’s as painful as Madonna’s high notes in “Into the Groove.” But like Madonna, Panchito’s saved by energy and sympathetic backing musicians who generally succeed in hustling him away from the long notes. On the song “El Polacas,” those musicians include the young band Grupo H100, who are also on Hyphy but who are not themselves hyphy. (Thinkpiece forthcoming.) 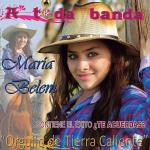 María Belem should not be confused with the telenovela María Belén aka María Belém. (I was briefly confused.) Her low budget videos “¿Te Acuerdas?” and “Yo Te Decido” came out last year and have been largely ignored, a shame for songs with such robust energy. Now comes her debut album Orgullo de Tierra Caliente (Prodisc), as cheerful an album as I’ve heard this year, even when Belem is lamenting “Que Triste Navidad.”

“Yo Te Decido” would be this week’s Pick to Click if I hadn’t come across this cumbia album that may or may not be a compilation, Banda Cohuich‘s No Te Equivoques (Pegasus). The cover advertises the exito “Son Kora Kau Te Te Kai Nie Ni (Dialecto Huichol),” Huichol being an indigenous Mexican language, “Son Kora” being a relentless jerking propulsion machine with brass, gang vocals, and a slippery synth line (I think). Quickie Youtube research reveals that several of these songs existed several years ago, but also that Banda Cohuich consistently rocks, especially on the speedy mucho-syllabic electrocumbia “Chicos iLu.”

OTHER SEEMINGLY NEW ALBUMS OR REISSUES: