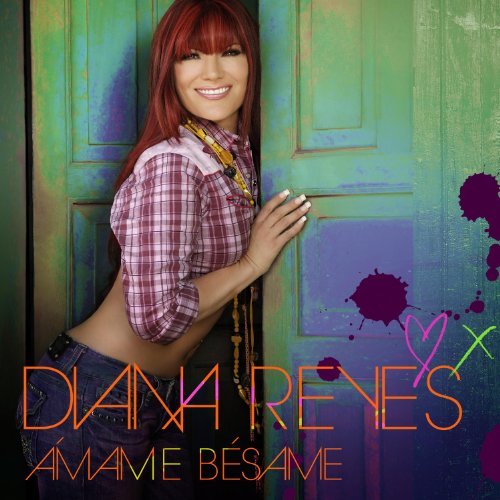 Since Diana Reyes is repackaging and re-releasing her music, I’ll do the same with my writing. Here’s an unpublished review of her really good 2010 album:

Diana Reyes has been making good albums for years, but Ámame, Bésame (“Love Me, Kiss Me”) is an explosion of color and energy like nothing else in her catalogue. It’s also a breakthrough for duranguense, the Chicago-based techno-polka style that five years ago threatened to take over regional Mexican radio. Back then, Reyes pulled one of the most effective genre switcheroos in Latin pop history, when she left her native norteño music for duranguense. Reyes was so confident about this career move, she titled her first album in the new genre La Reina del Pasito Duranguense (“The Queen of the Duranguense Dance Step”). Just to make certain nobody argued, she sang the hell out of her songs and grew her fingernails to a frightening length.

Duranguense’s impact has since cooled, thanks to scene infighting and the fickle winds of public taste. Maybe that’s why Ámame, Bésame alternates its polkas with more pop-wise techno cumbias, in the tradition of A.B. Quintanilla’s Kumbia All-Starz. Reyes even covers a couple songs by Quintanilla’s late sister, Selena, and works with his production associate, Luigi Giraldo. Giraldo has assembled a crack band for his songs, and his arrangements really sparkle. When you hear how the accordion switches from outlining the melody to playing riffs, or how the strategically placed laser FX chirp away in the background, you can tell how much care he’s lavished on this music.

Of course, such sonic tchotchkes are par for the course with most pop music. Reyes’s stunning achievement is that she now gets that same bold, detailed sound with her duranguense producers. If Reyes’s previous four duranguense albums were good, they also sounded a little thinner, as though they were made on a much lower budget. Indeed, that’s been the case with lots of duranguense music. For this album Reyes’s Chicago producers, the Orwellian-sounding “The Team, Inc.”, have really amped up the energy. The polkas are faster and louder. Where Reyes’s backing band once sounded anonymous, they now clatter away on tambora and provide wild electronic tuba fills. With their madcap woodwind lines and beat changes, these polkas resemble Carl Stalling’s orchestra performing Europop songs during Oktoberfest. Which isn’t to say it’s ALL louder — the background keyboards that once popped garishly out of the mix have been replaced by softer, subtler synths. What it all adds up to is increased professionalism and, I assume, a higher recording budget courtesy EMI, Reyes’s new label.

Here’s what hasn’t changed: Reyes still sings the hell out of her songs. Whether she’s singing songs written specifically for her, or covering Selena or Lupita d’Alessio (a balladeer and telenovela actress), Reyes delivers each tune with enough full-throated conviction to completely command her arrangements. Her clear tone and phrasing keep her free from syrupy melodrama, but her voice is laced with a magical huskiness that hints at some hidden pain or experience. You sense she knows more than she’s willing to reveal in the song. In the sinister “Ten Mucho Cuidado” (“Be Very Careful”), which sounds like sped-up Ace of Base + accordion, Reyes switches from quick, matter-of-fact tongue twisting to a soaring world weariness. Her song-picking ability is uncannily good, but this woman would sound great even if someone made her sing an album of Ariel Pink covers.

Thankfully it hasn’t come to that. This is the best-sounding duranguense — or, I guess, semi-duranguense — album I’ve heard. It’s bursting with catchy pop songs and full arrangements that allow them to flourish. Ámame, Bésame ends with a polka version of the title track, replete with a whistle doubling the melody, haphazard organ fills, electronic squelches, and what sounds like EVERY OTHER MUSICAL INSTRUMENT that The Team, Inc. could dig out of their Memory Hole. It’s as though they realized that, after revolutionizing the sound of the duranguense genre, they should send us out with as big a bang as possible. Explosion accomplished.