[Updated to correct some discographical confusion.] 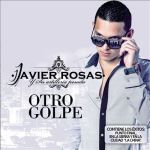 Sometimes it’s nice to hear pretty songs, or a variety of songs. But sometimes you just want an album to knock you flat for a half hour, and this seems to be Fonovisa’s goal with their new and unrelenting reissue of Javier Rosas y Su Artillería Pesada‘s early-career highlight, Otro Golpe, featuring a flashier cover photo and a couple additional songs. Rosas and his rocking bass + tuba quintet released three (I think) albums on independent labels before their breakthrough hit “La China” led to a 2014 major label debut. The singer-songwriter looks a little like Jonathan Rhys Meyers with his penetrating gaze, and he sings with blunt exuberance, as though spewing truths nobody else allows themselves. He enjoys spoken asides, too, which furthers the impression that he’s singing the collective unfiltered id. (Today’s gringo country comparison: Toby Keith.) Otro Golpe features some excellent math-oriented corridos like Pick to Click “Por Clave Llevo El 13,” “Soy El 4,” and “El 3-1.” I need to listen on better speakers, but I’ll go out on a limb and give this NEWLY REISSUED 2013 ALBUM a big VALE LA PENA.

The Hyphy label is also friendly — I know because I’ve talked with the owner (thinkpiece forthcoming!) — and it has two recent albums out: Chuy Vega’s Mas Underground y Mas Maldito: Puros Corridos and Los Originales’ Corridos de Poca M… (Ellipsis theirs.) Without running them through the translator, I’m gonna say both albums feature corridos, those traditional Mexican story-songs that often fixate on heroic tales of the drug trade. Listening while cleaning, Chuy Vega sounded slow and Los Originales sounded fast; do with that what you will. I will caution that neither album has anything to do with hyphy rap or hyphy norteño. (See thinkpiece, forthcoming.)

As we’ve discussed, the Goma label loves spreading the joy of puro Zacatecas saxophone to the world. Real “Up With People” types. To that end, they’ve released the latest dance album from Los Chacales de Pepe Tovar, Llego el Chacal, from Zacatecas by way of Wichita, Kansas. Lead song “Entre Fuegos Cruzados” is a spritely frolic.

Los Grandes Del Desierto are shrouded in sandy mystery, but they also have a sax and a new album, Reflexión (JB). Based on their album cover, the desierto in question belongs to Titan, the sandworm-infested (and poorly Photoshopped) Saturnine moon from Beetlejuice.

Remember back in 2006-07, when tierra caliente music briefly became a thing? Like duranguense, tierra caliente had synths playing banda parts, only with less frenetic tambora NRG. The band Tierra Cali, hailed by Billboard‘s Leila Cobo as standing “at the helm of this new wave,” recently released the very twee Enamorado de Ti (Los Creadores del Sacadito)(Ciudad). As you see from the album’s subtitle, at some point in their career Tierra Cali created a dance step, the Sacadito. I haven’t figured out the dance yet, but this live video, featuring the band looking and sounding markedly less twee, might help.

In singles, Nancy Hernandez, “La Dama Brava,” has a likable/annoying little song called “Mi Nuevo Cellular” (Starss). Basically it’s a single melodic phrase repeated over — and over — two chords and a ringing phone, but tuba and accordion are busy and Hernandez has the beginnings of a musical personality.