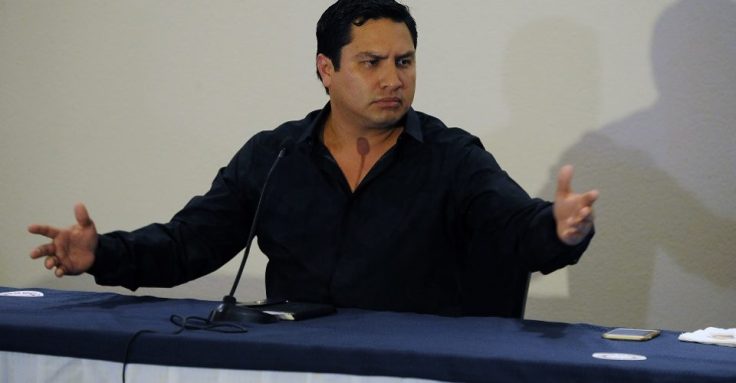 NorteñoBlog top commenter Eric encourages me to address the current legal and financial travails of the continent’s best voice, Julión Álvarez. Challenge extended! If, as Sarah Huckabee Sanders has said, “anybody with a computer can be a journalist,” her operative word remains “can.” Speaking from personal experience, most of us “computer havers” maintain such extensive to-do lists of huapango videos and jazz podcasts that important stories can fall between the keys. But I’ll give it a go.

In 2007, after singing with Banda MS for three years, 24-year-old Álvarez went solo. With a drumless, tuba-bottomed trio, he released his first album Corazón Mágico under the name Julión Álvarez y Su Norteño Banda. Since then he’s remained as prolific and consistent as Electric Six or someone, releasing a studio album almost every year — including the best album of 2014, Soy Lo Que Quiero…Indispensable — along with several live albums and collections. He’s grown into the biggest solo norteño star who’s not named Gerardo Ortiz, reliably scoring romantic radio hits in two countries, plus mentoring young singers and judging La Voz… México. Until his recent troubles hit, he was set to judge the latest season of La Voz Kids, too. In 2015 he was Spotify’s most-streamed artist in Mexico.

Along the way, Álvarez started operating some music-related businesses. Germane to our story, his name is on the paperwork for the company that produces his concerts, Noryban Productions; a small ticketing agency, Ticket Boleto; and his publisher, JCAM Editora Musical, “JCAM” being the initials of his birth name, Julio Cesar Alvarez Montelongo. Also along the way, he met a friendly businessman named Raul Flores Hernandez. “If you met him [Flores Hernandez], you’d probably like him,” says one former official of the U.S. DEA. A lot of people liked Flores Hernandez, including fútbol star Rafael Marquez, who also now finds himself in the shit.

Unbeknownst to these innocents (or so they claim), Flores Hernandez also ran a cocaine cartel. Business Insider describes how he operated independently of the big, more violent cartels, while also skillfully mediating between them. In March, he was indicted in D.C. and California for trafficking and money laundering; he was then arrested in Jalisco in July. Shortly after that, on August 9, the U.S. Treasury’s Office of Foreign Assets Control (OFAC) updated its “Specially Designated Nationals” (SDN) List, the registry of people it prevents U.S. citizens from doing business with. Of 21 Mexican citizens and 42 companies, the two biggest names were Rafael Marquez and Julión Álvarez, along with those three Álvarez-owned companies listed earlier. The charge was money laundering.

Money laundering is, of course, a time-honored aspect of the music industry, which until recently has been lathered in obscene amounts of money. Hilarious stories abound, inovolving everyone from Australian promoter Andrew McManus to Spanish singer Isabel Pantoja to American rap exec Irv Gotti. (“Mr. Gotti’s friend, Kenneth McGriff, known as Supreme on the streets of Queens… would simply send bags of cash to Mr. Gotti’s label, Murder Inc.”) The Treasury contends Álvarez and the others have “held assets” on Flores Hernandez’s behalf, and that’s why they’ve canceled Álvarez’s visa, frozen all his U.S. assets, and forbidden Americans from doing business with him. Seriously — try finding his music on U.S. Spotify any more. (Eric adds, “His music was removed from my iTunes account…”)

After the accusation of laundering has come the inevitable spin cycle. Álvarez admits he met Flores Hernandez years ago, at a club in Guadalajara, but thought the narco was a concert promoter. He denies they ever did business together. Whether his assets will ever thaw remains a cold, delicate question. (A Mexican judge recently ordered Marquez’s assets unfrozen, but that was before the world discovered Marquez’s madre once bought a substantial hunk of property with Flores Hernandez. Ay-yi-yi.) Álvarez continues to play concerts in Mexico, but the loss of U.S. streaming and touring revenue has gotta hurt him financially.

As NorteñoBlog tries to iron out this story’s wrinkles, my feelings are a wash. (OK, I’ll stop now.) On the one hand, I can totally believe that Álvarez, as an inexperienced businessman, unwittingly laundered money for a narco, especially given how closely the Mexican cartel world associates with the Mexican music world. Similar things have happened all over the world, so why not in Mexico too? Maybe Álvarez even knew what he was doing. Given the sad history of other Mexican singers who, wittingly or not, got too close to the cartels and were shot for their trouble, give Álvarez this: if frozen U.S. assets are his stiffest penalty, his fate could be infinitely worse.

On the other hand, I could also believe our over-zealous Administration is making an example of some famous Mexicans by overstating the dastardly nature of some trumped-up “crimes.” And I’d still believe that, even if this operation began under the Obama regime. For American politicians, the spectre of dark skinned people selling us drugs is an irresistible excuse to act tough, rather than effectively. Our Treasury Department is sure making a point of crowing: “This action marks the largest single Kingpin Act action against a Mexican drug cartel network that OFAC has designated.” And some of the coverage given this story has been predictably awful, with Breitbart’s Warehouse of Questionable Capitalization (no link) sanctimoniously calling Álvarez a “Narco-Music Superstar,” “known for praising the drug trafficking lifestyle in his music.” Bullshit. If they’d paid attention to Álvarez at all before turning his name into racist clickbait, the computer-havers at Breitbart would know that, while the singer excels at corridos and romantic music, he’s far better known for the latter. Then they’d publish a list of white singers they love who have praised the drug consumption lifestyle in their music, and they’d ask themselves whether the two repertoires are in any way linked.

I don’t hold out hope.