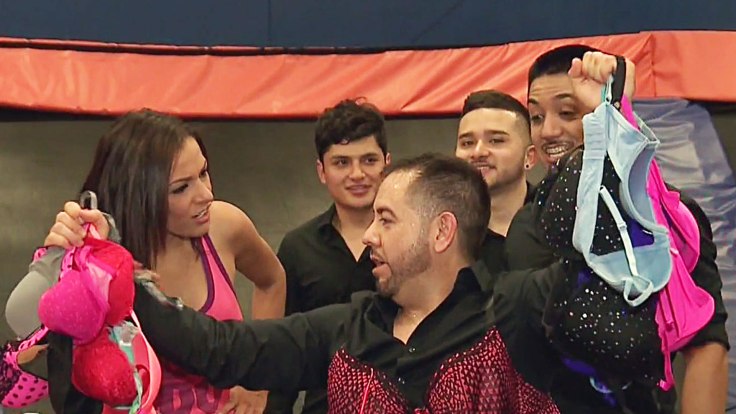 It is NorteñoBlog’s longstanding position that the puro sax styles of Chihuahua and Zacatecas would improve with the addition of more terrible “sax” puns in the titles. The world’s top puro sax curator DJ Alfonzin directs me to the latest from Los Últimos de Topochico, a Monterrey seven-piece that’s been around since at least 2012 but has left a very small footprint in El Norte. They’re trying to change that with the male-gazey video for “Regálame Ésta Noche” (alternate title: “Sáxame Ésta Noche”), in which an extremely sheepish bro fantasizes about his hot girlfriend abandoning him and donning fancy lingere to hook up with another random woman they met at a restaurant. Astute YouTube commentor YsyNicole points out that this plot is a naked attempt to drive click traffic. The worst part is, Los Últimos are good enough that they didn’t need to seem so desperate. This “Regálame” is a far cry from Javier Solis’s sentimiento standard — it’s faster and catchier, and if you listen to this genre for the endless entwinings of sax and accordion, wrapping around one another like pea vine tendrils, this tune produces.

Those seeking to avoid Los Últimos’ sexist clickbait scheme are directed instead to their “El Huapango de Rocky Balboa” (aka “Gonna Sax Now”), a crowd-pleasing medley of “Gonna Fly Now” and “Eye of the Tiger,” performed in the trickily subdiveded and lately hip huapango folk dance style. Or to their self-released 2017 EP, Los Perrotes de Monterrey, which opens with a huapango version of “Ghost Riders in the Sky” and remains just as delightful for three more songs. There’s a fine line between crassness and toxicity, as we learned from El Sistema de un Abajo, and those who fall squarely into the “crass” category deserve all the attention they can get. VALE LA PENA

We last caught up with Dallas’s bestselling La Energia Norteña in late 2016, when their dull fifth album for the Azteca label was topping Billboard‘s Regional Mexican album chart. They’ve since released album #6, El Sueño Americano (suggested title: El Sueño Saxual), which is no less dull and sadly is not a sax-and-accordion-driven concept album about the plight of immigrants, although the saxless title lament addresses that topic. But maybe this critique is too short-sighted. Surely the plight of immigrants is a multifaceted plight, encompassing diverse subjects like SEDUCING WOMEN THE DAY BEFORE THEY MARRY SOMEONE ELSE AND CALLING IT THEIR “BACHELORETTE PARTY” (“Despedida de Soltera”)??? Talk about plight. Like calling a precious kitten “Big Guy” or Donald Trump “Mr. President,” “La Energia” seems to be a name bestowed with irony, since these guys make even their pre-wedding seductions sound staid. NO VALE LA PENA
END_OF_DOCUMENT_TOKEN_TO_BE_REPLACED

It is the longstanding position of NorteñoBlog that the puro sax styles of Chihuahua and Zacatecas would improve with the addition of more terrible “sax” puns in the titles. Out in the west Texas town of El Paso we find the brand new group H Norteña, whose debut album Definitivamente (alternate title: Definición de Saxo) is just out on the tiny Regiomex label. Back when duranguense was a thing, lead singer Heraclio “Lako” Cepeda fronted the duranguense outfit Conjunto Atardecer, which means he knows his way around saxes playing absurdly jaunty riffage over unrelenting polka beats. Sometime before you die, check out Atardecer’s 2009 hit “Encontre,” as delightfully clattery and synth-stabby as any duranguense hit you care to name.

With members hailing from both Durango and Chihuahua, H Norteña slows down the tempo a few clicks for songs like the title single and “Amor Fantastico” (aka “Saxo Fantastico y Donde Encontrarlo”). NorteñoBlog is partial to their herky jerky folk dance medley “Popurri de Huapangos” because I enjoy subdividing 6/8 beats while contorting my body. Just a little trick I picked up from Dr. Alex Comfort M.D., D.Sc., Y.M.M.V.

Tired of huapango? Fed up with… merequetengue? Then by all means avoid “Mi Son” (suggested title: “Sonrisa Saxy”) by Azierto Norte. It’s another galloping 6/8 instrumental with tricky internal rhythms and those rarest of all beasts: bajo sexto solos. And whatever you do, stay away from San Luis Potosí natives Conjunto Águila Real and their dark “Huapango El Pisteador” (aka “Sax y Tequila”), which, with a few changes in timbre, could pass for a British folk-prog instrumental from the early ’70s. Other points in its favor: the rad sections where the accordion plays lightning fast triplets over the slower sax melody, and a dramatic ending on what they call in music school the “James Bond chord.” Pick to Click!

Who Played It Better: Ariel Camacho or These Dudes?

First, the moment we’ve all been waiting for: a crap recording of Roberto Tapia’s new banda single “No Valoraste.” It’s trad and jubilant. You’re welcome.

But now it’s time for a new, probably never-to-recur NorteñoBlog feature called “Who Played It Better: Ariel Camacho or These Dudes?” Ariel Camacho, you’ll remember, has been a favorite of the blog ever since I heard his excellent El Karma album at the beginning of the year. He played the requinto guitar — tuned higher than normal, prone to virtuoso displays — and led a band, Los Plebes del Rancho, that also included a rhythm guitar and a tuba. Omar Burgos’s tuba managed to function as bass, percussion, and lead instrument all at once. Then in February Camacho died in a car accident at the way-too-young age of 22. Tributes followed, and outpourings of grief, and — this is where our new feature comes in — bitings of his post-Sierreño style.

So I ask you, loyal NorteñoBlog reader: WHO PLAYED IT BETTER?