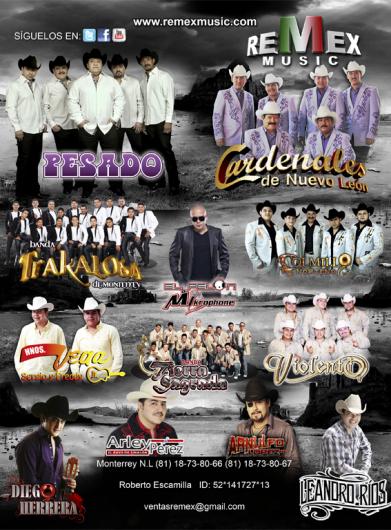 The common thread this week is Remex Music, an indie label seemingly without major distribution — someone correct me if I’m wrong — and whose Youtube channel lords over other labels’ view counts like Lorde. 109 million for “La Buena Y La Mala” by Banda Tierra Sagrada! (See below!) Of course, hits don’t necessarily make for quality, but Remex’s folks seem scrappy and good, at least in the following examples:

“Mi Padrino El Diablo” – La Trakalosa De Monterrey
Satan’s got his hand in those 36 million views (because 36 is six sixes, or two marks of the beast, you see) and possibly in that #12-and-climbing position on Billboard’s Regional Mexican chart (don’t even ask about the numerological significance there). “Mi Padrino” is the story of a young kid, chased from home by an abusive padre and sleeping on the streets, until “un compa de negro [se toca] la frente”… “a companion of black touches his forehead.” Creepy! Turns out to be the Devil aka the Godfather, and he takes our friend’s soul in return for untold wealth and power, so now our friend sits pretty like Tom Hagen and/or Robert Johnson. The music’s a cheerful blend of small band with big banda, subtler than this year’s similar mashups from LOS! BuiTRES!, and if the brass riff’s recycled, the singers sell it like it’s brand new.
VALE LA PENA

“Soy Un Desmadre” – Banda Tierra Sagrada ft. Marco Flores
Wild with tempo shifts and Marco Flores’s charismatic reed of a voice, these Remex bros are apparently bad news if you have the misfortune to let them enter your home, but give ‘em two and a half minutes and they’ll probably get a wriggly foot in the door. #11 RegMex and climbing.
VALE LA PENA

“De Norte A Sur” – Cardenales de Nuevo Leon
The lope of love. This charming tune only reached #19 RegMex back in 2012, but Chicago radio stations still play the heck out of it and why not. If you’re trying to learn Spanish it’s got a chronological progression of well-enunciated nouns — BEsos to PREso to coraZOOOOON to CUERpos to SEXo — that’ll help you catch some rockin’ mnemonia. The boogie woogie flew from singer Cesareo Sánchez many moons ago, but his performance manages lived-in confidence without doing much at all, almost as if he’s advising the horny young couple in the video. He’s seen all this before.
VALE LA PENA

“Soy El Mismo” – Prince Royce and Roberto Tapia
It can’t all be good news, and this ain’t Remex. While the bachata/banda mashup is mildly intriguing, especially during the sections where the two different rhythms blat along without apparent regard for one another, it’s not much of a song. And anyway, Gerardo Ortíz already did the banda plus bachata thing more gorgeously on last year’s “Eres Una Niña,” just now climbing the chart. These two showbizzers debuted the song on La Voz Kids, which they co-host. “Moves Like Jagger” wasn’t much of a song either.
NO VALE LA PENA