“The first time when I hear the corridos — ‘Sanguinarios del M1’ — when I hear that song and when I see how these guys dress, I like it, and I buy a lot of clothes and I like a lot of style of those guys, of those groups… the Movimiento Alterado.”

So says Juan Carlos, a 25-year-old norteño fan who lives and works mixing chemicals near Chicago. Though his family hails from the central Mexican state of Guanajuato, he mostly treasures the new corridos coming out of Sinaloa, a few states to the northwest. His first love, “Sanguinarios,” was the 2010 flagship song of Movimiento Alterado, a loose affiliation of wannabe millionaires playing ultraviolet horror-corridos under the aegis of Burbank-based producers Adolfo and Omar Valenzuela, aka “Los Twiins.” They’re the guys in the “Sanguinarios” video who scowl at you last, and the only ones who don’t sing a verse.

Listeners with a vested interest in the 100-year-old corrido tradition tend to despise Alterado, but for many young fans like Juan Carlos, the movement defines “corrido.” (His parents preferred “old school” Mexican singers like José Alfredo Jiménez, Pedro Infante, and Ramón Ayala.) Plenty of people have written about Alterado in the past few years, but just so we’re all up to speed, here’s professor and Audiotopia author Josh Kun on “Sanguinarios”:

The song’s title roughly translates as “The Bloodthirsty Killers of El M1”—M1 is the nickname for Manuel Torres Félix, an infamous member of the Sinaloa drug cartel. (He also goes by El Ondeado, “The Off One” or “The Crazy One.”) His long rap sheet includes a 2008 “message murder” in which he left three decapitated bodies with severed legs in the trunk of a car with a signed note and a decapitated snake.

“Sanguinarios” begins with the sound of semiautomatic gunfire, and then a rotating cast of singers role-plays as AK-47- and bazooka-toting M1 mercenaries. “We are crazy bloodthirsty guys,” the singers declare. “We like to kill.” They brag about their kidnapping, beheading, and torture skills and declare themselves architects of a reign of gunfire that, they promise, will never end. When the singers deliver these lines in the video, some carrying guns, others wearing ski masks and bulletproof vests, they stare into the camera, its lens splattered with blood.

Maná-style hippies they ain’t. Nor are they old school corrideros like Los Tigres or Chalino Sanchez. For better or worse, Alterado music is authentically Something New. (As Charles Aaron once wrote about Dr. Dre: “A dubious vision, but it’s all his.”) The video contains early appearances from singers who’d go on to bigger and more mainstream things — Noel Torres has marshalled the fiercest band in the biz, and El Komander has settled into a Libertines-gone-country career of floppy drunken heartache — but the Alterado movement was briefly the most influential voice in norteño, shaping fans’ style and coloring gringos’ views of corrido music in a bloody haze.

I asked Juan Carlos what he liked about narcocorridos.

“I like the drug dealer style, but I know that it’s dangerous so I’m not going the same like those guys, but I like the corridos. I like the style of the Mexican cartels… We drink with my friends, we getting drunk. Everybody thinks that they know the people [in the songs]. When we drunk, we sing a lot of Mexican narcocorridos… We feel good ‘cause maybe one people is from Sinaloa, so it make you like proud of that people. You’re proud of that people.”

He’s conflicted, though. When I ask whether he likes the songs “with the violence and the heads chopped off,” he says, “I prefer the other songs, the regular songs. I feel bad because we hear the narcocorridos in Mexico, and right now in Mexico is dangerous, and the narcocorridos is like doing bad, bad things, the people is doing bad things. In Mexico right now [the musicians] can’t play narcocorridos — if you play one song of the Chapo, they thinking that you are in the cartel in Mexico.”

So the authorities will cancel your concert? “Yeah. And that’s why stations, they don’t play narcocorridos there — because in Mexico, if one station play narcocorridos, the other, the ‘versus’ cartel go with the station and they kill the people there.”

Nevertheless, Juan Carlos feels like white people in the U.S. have the wrong idea about norteño fans. “It’s a lot of racist people here. They think we come here and we sell drugs and everything… But most of the Mexicans came here for work and make money for families in Mexico, not for doing a lot of stuff here, like sell drugs and fight with other people and making crime and all that stuff…

“I have friends like black people and they tell me they like the Mexican music… I have a lot of friends, black friends and white friends, and I try to explain to those guys, I always talk to those guys in the gym or at work. They tell me, ‘Hey, what’s this mean?’… They know the Chapo, they know the drugs, a lot of the drug dealers, you know?… ‘Cause in the news, they posted up a lot of things. They know.”

He admits the news of El Chapo’s recent prison break didn’t look good for Mexico. “It’s embarrassing for us, ‘cause not only the United States but Central America or maybe Spain or other countries say that, ‘The [Mexican] government… is stupid, ‘cause how the Chapo has escaped two times? … So Mexico is stupid for this escape.’” Juan Carlos disagrees; he thinks the Mexican government knew exactly what was happening. “I don’t think the Chapo escaped through the ground… he escaped from the door… he pay a lot of money. He have a lot of money.”

Wait — so the government, or at least the jail, helped El Chapo escape? “Yeah. Not the government… Maybe the Chapo say, ‘I’m done, I need to escape,’ or something like that. Peña Nieto, the President, maybe… he knows. He knows.

Juan Carlos’s own family has received cartel threats. “If you have money… [One] cartel go to my family, ‘cause my uncle, he sells beers and tequila and all that stuff. ‘If you not pay me this money, I kill you tomorrow,’ and my uncle say, ‘I don’t have money. If you wanna kill me you kill me, but I don’t have money.’ They always thinking that people that have a store or some business, they thinking that they have money, but most of the people is only work for his family.” He thinks El Chapo’s organization, the Sinaloa Cartel, foregoes such shakedowns, only targeting people in rival cartels: “They don’t have time to kill innocent people in Mexico.” 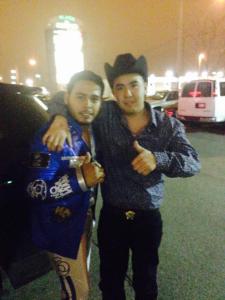 In fact, despite having family in a different state, Juan Carlos has pride in Sinaloa — both the state and the cartel. His favorite norteño concert was by a group rumored to have played for El Chapo. “The best is when Grupo 360 is coming. I take pictures with that group, and I feel good — I mean, like, I’m sorry what I tell you, but I know that group go with Chapo. I feel good ‘cause I know those guys singing for the Chapo and his family.”

Juan Carlos is also a big fan of Grupo Máximo Grado and Gerardo Ortíz (“the best guy right now in corridos… I have all his CDs”). Like many corrido fans, he also listens to a lot of rap.

“I like West Coast rap, from L.A.” he elaborates. “One of my favorite rappers, he singing like my life, my style of life. My mom is single, she worked for me and my brother when we are younger, and she work hard. All the styles of that music, they kind of like stories about me, like that’s what our life like. They talking about when he don’t have father, they have like…” Juan Carlos trails off, then gets specific.