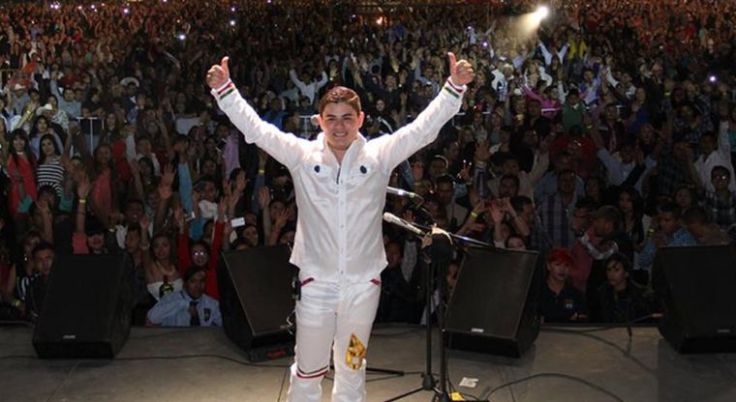 Baby-faced Alfredo Olivas is sitting pretty at #3 in Mexico this week. You might remember Olivas from his unfortunate incident a little more than a year ago, when he was playing a concert at the Hacienda club in Parral, Chihuahua. In the middle of the concert he decided to flirt with a young lady sitting in VIP by throwing her his jacket. As everyone knows, flirting with young hotties from the stage is one of the three main benefits of being a touring musician; the other two are a preternatural ability to pull open doors while carrying heavy amplifiers, and, if you’re lucky, free nachos.

The young woman’s male companions didn’t see it this way. Alfredo’s insouciance, coupled with the fact that his thrown jacket knocked over some liquor bottles on the table, sent these young men into a murderous rage. They shot at Alfredo, injuring him and eventually killing at least one of the Hacienda’s patrons. This whole situation was exceedingly stupid, and should serve as a good reminder next time you hear some U.S. or state legislator trying to extend legal carry rights to places where people consume alcohol and get rowdy. Such places are not where you go to organize your “well regulated militia.”

Anyway, NorteñoBlog welcomes Alfredo back with a new single not included on his so-so 2015 album Privilegio. “La Sigo Y Me Sigue (Todo o Nada)” is some mid-tempo romantic waffling — I think Alfredo’s wary to commit himself to a new mujer because whenever he does commit, he goes all the way, which has led him to build a sarcastic wall around his heart. It’s got a great thick groove — “meaty” if I’m wearing my classic rock dude hat — with the tuba stomping against a syncopated bajo sexto riff and Alfredo’s accordion simply but effectively filling up the space. Sometimes I complain when bands (*cough* Calibre 50 *cough*) try to play power ballads, but their sparse arrangement leaves the song sounding thin and empty. Alfredo doesn’t have that problem here. “Todo o Nada” is a convincing norteño-rock hybrid, an almost-four-minute Pick to Click that doesn’t wear out its welcome.

Not much else happening! Intocable’s in at #16 with their U.S. hit (and previous Pick to Click) “Tu Ausencia.” Maluma’s in at #20 with a reggaeton banger that’s sweeping every chart in the nation. And over on the “Pop” chart, the man with the continent’s best voice Julión Álvarez is helping out Anahí on her otherwise forgettable ballad “Eres.” Devoted fanboy completists like yours truly will wanna click on that; everyone else can go back to fomenting your armed resistance in the Hacienda Club VIP.

These are the Top 20 “Popular” songs in Mexico, as measured by monitorLATINO. Don’t confuse “Popular” with the “General” list, which contains many of the same songs but also “Stressed Out,” “Cake By the Ocean,” that remake of “Fast Car,” and the techno-polka/square dance “I Feel Alive” by Mexican boy band CD9, one of whom has bravely sustained an attack of the Hutchence hair.