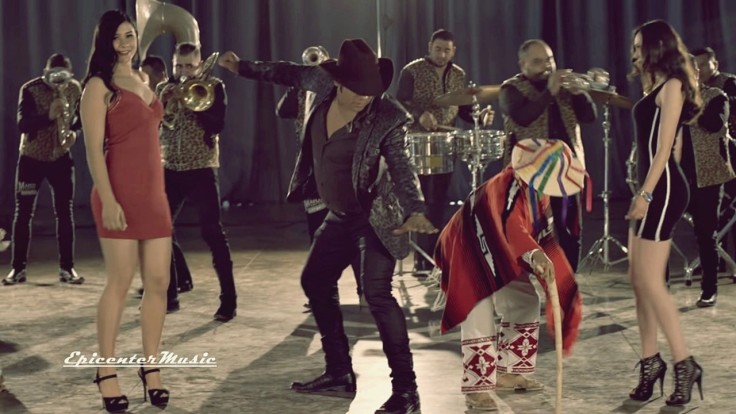 Controversy! ¡Polémica! NorteñoBlog’s favorite dancer Marco Flores (aka Marco A. Flores) y su Banda Jerez (aka #1 Banda Jerez, or simply La Jerez) are back on the Mexican airwaves with “Los Viejitos” at #17, an amped up waltz that takes an insanely complex approach to both rhythmic subdividing and cultural appropriating.

The song, you see, plays on the traditional Danza de los Viejitos, danced for centuries by the indigenous Purépecha people in the highlands of Michoacán. Flores lives two states to the north in Zacatecas, but because he bows to Terpsichore in all her forms, he’s opened his new video with a not necessarily accurate re-enactment: five guys in flamboyant stooped-old-man costumes walk a circle, “helped” by members of La Jerez, who keep looking underneath their ponchos but seem otherwise respectful. The slow, trad fiddle music of la Danza stops abruptly, La Jerez kicks into its waltz, Flores flails his limbs, and the stooped old men spring to life, emboldened by this rad new beat. There’s a long, proud history of affectionately tweaking the Olds by replacing their slow rhythm with a new, faster rhythm — recall the Clash’s “Wrong ‘Em Boyo” or Nirvana’s “Territorial Pissings.” Flores seems to be operating on the same impulse here.

¡No tan rápido! says Michoacán’s secretary of indigenous people, Martín García Avilés. (Let’s just note how great it is that a Mexican state has its own secretary of indigenous people.) García Avilés calls the video an insult to native traditions nationwide. Flores and La Jerez are denigrating the Purépecha people and subjecting them to ridicule, he says, and they should take down the video. Flores expresses surprise, countering that he’s trying to rescue and exalt la Danza and bring it to the attention of younger generations. NorteñoBlog, watching a video of an actual Danza, asks warily, “Aren’t the dancing fake old men supposed to be funny? At least a little bit?” Not that I plan to start making video parodies of indigenous dances any time soon. Tumblr would have a collective aneurysm. But I’m curious to know how Flores’s video reads to other people who’ve grown up with la Danza de los Viejitos. Offensive? Funny?

Anyway, as I mentioned, the rhythms in this thing are also stellar — bar by bar, the band divides the basic pulse into either two or three, with Flores subdividing those beats into even smaller and faster bits during the choruses, his accents landing in unexpected places. Limbs flail accordingly. Pick to Click!

— At #12 we find the latest from Sierreño idols Los Plebes del Rancho de Ariel Camacho, “Que Se Canse de Llamar.” The romantic guitar/tuba ballad is Los-Plebes-by-numbers, although young frontman José Manuel Lopez Castro has deepened his delivery to sound more like his predecessor, the late Ariel Camacho. More notable than the song is its label: after a stint on powerhouse label DEL Records, Los Plebes have returned to their original indie label JG, amid… Controversy! ¡Polémica! 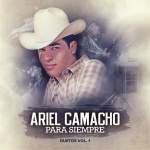 You’ll remember that after Camacho died two years ago, the charismatic head of DEL, Angel Del Villar, recruited the teenage Lopez Castro to lead the trio. Their first hit single was a corrido ode to Del Villar himself, “DEL Negociante,” leading some media outlets to construct elaborate analogies to the Doors and the Reprise Records family. Trouble was afoot, however: last year Lopez Castro and rhythm guitarist César Iván Sánchez left DEL, accusing Del Villar of “explotación.” You don’t say! Tubist Omar Burgos stayed with the label — he now plays with DEL’s other Camacho replacement, Ulices Chaidez y Los Plebes, while Los Plebes originales have recruited their former tubist Israel Meza — and both Burgos and Del Villar can be seen defending themselves in this video interview. Firm in its belief that the best market is a flooded one, DEL has also just released Ariel Camacho Para Siempre, a tribute album where DEL artists show up on Los Plebes’ tracks to sing duets with Camacho from beyond the grave. It’s very Unforgettable, if not actually unforgettable. Because Camacho was the best singer of his songs, the album is NO VALE LA PENA, unless you’ve always wanted to hear Gerardo Ortiz sing half of “Te Metiste” only to get shown up by someone better.

Plainly this situation calls for another elaborate analogy. Imagine if, after Kurt Cobain died, David Geffen persuaded Beck to lead Nirvana. They recorded one album under the name Kurt Enters Nirvana — remember, terrible band names with verbs were a thing in the ’90s — leading with the hit single “Reppin’ for Geffen.” (Admit it, you can hear Beck rapping the words “so much drama in the DGC.”) But then, suspecting that David Geffen was really all about making money and not so much into art, Beck and Krist Novoselic left the label and started recording for Sub Pop again. Chad Channing played drums with them; Dave Grohl joined Weezer. A stung Geffen released a multi-artist tribute album — also a thing in the ’90s — of Geffen stars singing on Nirvana tracks. Nirvana Forever? DGC Parities Vol. 1? Whatever the title, who can forget Adam Duritz yowling through “Scentless Apprentice”?

— Speaking of tribute albums, at #9 we find blog fave El Komander singing another Unforgettable-style duet with the late banda singer Valentín Elizalde. “Tengo Ganas” appears on the new Tributo a Valentín Elizalde (Fonovisa), marking 10 years since Elizalde was shot to death immediately following his November 25, 2006 concert. Since Elizalde was not primarily a corridero, various rumors swirled about the motive for the killing. In Billboard, Leila Cobo suggested Elizalde ran afoul of “local strongmen” who “charge a ‘tax’ for performing. It’s a fee that promoters pay quietly, chalking it up to the cost of doing business in Mexico.” In the London magazine The Word, Elijah Wald cited a rumor that Elizalde “had been killed in response to a YouTube video that used one of his songs, ‘A Mis Enemigos,’ as the soundtrack for a threat directed by Sinaloan gangsters at the Juárez cartel.”

As would later happen with Ariel Camacho, Elizalde’s albums started selling like hotcakes, filling the charts with his rich voice and catchy banda pop tunes. He’d been on the verge of breaking through to a larger audience, and his death finally got him there, likely introducing him to a number of younger artists on this tribute album. Not all the songs feature Elizalde’s voice. La Séptima Banda plays a spritely version of “Vete Ya,” whose clarinet flourishes and chord changes remind NorteñoBlog of Yolanda Perez’s gorgeous “Esto Es Amor”. (Nobody in La Séptima raps, though.) Calibre 50 and Remmy Valenzuela also sing highlights. Unlike Ariel Camacho Para Siempre, this tribute album is VALE LA PENA. Fonovisa plainly has a deeper bench than DEL, and re-recording Elizalde’s songs, vital precursors to the current banda pop scene, feels less redundant than rehashing Camacho’s readily available Sierreño. Plus, the Elizalde album has several Big Dumb Cumbias, one of them about a potato. Another profligate week for Picks to Click!

These are the Top 20 “Popular” songs* in Mexico, as measured by monitorLATINO. Don’t confuse “Popular” with the “General” list, which contains many of the same songs but also “Shape of You,” “Paris,” “I Feel It Coming,” and “Reggaeton Lento,” the latest hit for enviably-haired boy band CNCO, whose video dance moves are very NKOTB, although I worry their bad boy attitude is blocking the bowling lanes.

8 thoughts on “¡Controversy! ¡Polémica! (Who’s On the Mexican Radio?)”