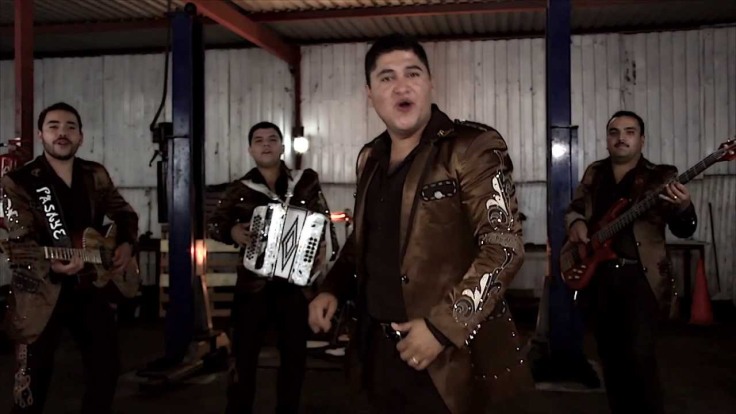 NorteñoBlog has heard your clamorous cries, and brings you a YouTube playlist of
NORTEÑOBLOG´S TOP SINGLES OF 2017
(Spotify playlists are here and here.)

1. “Volveré a Amar” – Calibre 50 (Fonovisa)
Swanky midtempo heartache with backbeat, doo-wop tuba, and Eden Muñoz doing his best low-range impression of the late Valentín Elizalde. From the VALE LA PENA album Tributo a Valentín Elizalde (Fonovisa).
U.S. radio hit
2. “El Paciente” – Alfredo Olivas
Endlessly appealing, rippling deathbed banda, including a shoutout to the mythic Catarino, a corrido legend who fought in the Revolution and healed his wounds with his own saliva.
U.S. and Mexican radio hit
3. “Huapango El Pisteador” – Conjunto Águila Real
With a few changes in timbre, this could pass for a British folk-prog instrumental from the early ’70s. Other points in its favor: the rad sections where the accordion plays lightning fast triplets over the slower sax melody, and a dramatic ending on what they call in music school the “James Bond chord.”
hasn’t charted 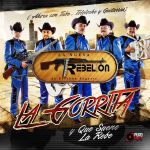 4. “La Gorrita” – La Nueva Rebelión (Puro Party)
This is still a band trying desperately to pull as much music as possible from their poor instruments. “La Gorrita” is a good example: six verses following the titular beanie-wearing dude from cartel hub to hub, each verse played differently, with unpredictable fills and accents jumping at you like faces in a crowd. From the VALE LA PENA 2016 album La Gorrita y Que Suene La Rebe.
hasn’t charted 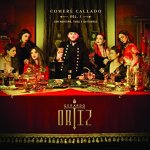 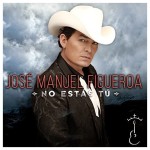 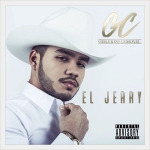 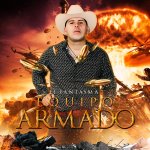 16. “Mi 45” – El Fantasma (AfinArte)
El Fantasma’s narrator is somehow involved in the Sinaloa Cartel. He’s still firm with El Chapo’s sons Ivan and Alfredito, whose Instagram personas out-smarm the Trump brothers’. He may be hiding out in the wilderness with his 45, biding his time or doomsday prepping. International man of mystery! From the VALE LA PENA 2016 album Equipo Armado.
U.S. radio and viral hit
17. “El Pasito Perrón” – Grupo Dinastia Mendoza (Filser)
Chintzy electrocumbia depicting a dancing sensation that utterly failed to sweep the nation, until someone uploaded a video of a toy baby Jesus dancing to it. This was of course hilarious, especially the heaps of background stinkeye given by a wary shopkeeper, and it became a meme: you can now find “Pasito Perrón” videos featuring everyone from Winnie the Pooh to his orange honey-chasing doppelganger Donald Trump. A bunch of stormtroopers even performed the dance on Britain’s Got Talent, and Simon changed his facial expression at least twice.
U.S. viral hit
18. “No Vuelvas a Llamarme” – Joss Favela (Sony Latin)
The interplay between accordion and rhythm section is on point and, whaddya know, the words — about how Favela’s always too busy to take your calls — are funny.
Mexican radio hit
19. “Eres” – Costumbre (Revilla/Azteca)
Intocablish, with harmonies.
hasn’t charted
20. “Los Viejitos” – Marco Flores y La Jerez (MF)
Aren’t the dancing fake old men supposed to be funny?
Mexican radio hit

AND NOW FOR SOME THEORIZING:
If you’ve hung around NorteñoBlog for any length of time, at some point I’ve backed you into a corner, eyes burning with laserlike and possibly alcohol-fueled focus, and tried to convince you of one or more of the following propositions:

1. Plants are alive, man; and furthermore, broccoli, kale, cauliflower, cabbage, and Brussels sprouts are all varieties of the same mustard species, and when you plant them the seeds all look like mustard seeds;
2. The best Christmas movie is Eyes Wide Shut;
3. Regional Mexican music is pop music, dammit!

The first two are objective facts and require no further explanation. But I fear I’ve never been clear on what I mean by #3. Usually I say it to counter the notions, real or misperceived, that regional Mexican music is fundamentally folkloric or pathological in nature. In fact it can be both; but neither is fundamental.

“Pop music” can describe both musical elements and ways of relating to music. (I’d say “methods of consumption,” but who buys music any more?) The first instance is easy to spot. At the top of the above playlist sits “Volveré a Amar,” Calibre 50‘s remake of a 2004 Valentín Elizalde banda song. Though it’s played by a Mexican brass band, it’s clearly informed by U.S. pop music that charted in the ’50s — the rhythm is a backbeat, the chord changes derive from Those Magic ones, and the singer croons. This is a world away from the three-chord polkas and hookless corridos that sprang from Sinaloan villages a century ago. It’s pop music as most U.S. listeners know to hear it. We also find it in the hooks of Christian Nodal‘s unbelievably popular debut single “Adios Amor” (#11 on my list), and the descending bassline of Joss Favela‘s “No Vuelvas a Llamarme” (#18 but should be higher), things like that.

Yet, as Helena Simonett showed in her book Banda and I reiterated in this article about Banda El Recodo, even the three-chord polkas and hookless corridos can register as pop with their audiences. This is where the idea of “pop music” gets trickier, and it’s also where people can misunderstand norteño and banda songs.

This music is not best understood as folklore — not even when it draws on folkloric elements, like Conjunto Águila Real reviving the huapango rhythm in the song at #3, “Huapango El Pisteador,” or Marco Flores pissing off Michoacán’s secretary of indigenous people by making fun of La Danza de los Viejitos, down at #20. Writing off this music as “traditional” deadens it, Grammy-fies it, seals it behind glass and denies its place in a living industry where every weekend bands play bailes, places where people party and fight and make out and, yes, communicate with one another by dancing to huapangos, among other rhythms.

Nor is this music best understood as a pathology, not even when La Nueva Rebelión (#4) and Lenin Ramirez (#5) are singing from the POVs of violent narcos — and btw, did you know the narco narrators in these songs are often real criminals? (Dun dun DUNNNNNHHHH!) Focus on the pathology over all and you risk glibly glorifying killers (“Bro, those narcos are badass!”), or else demeaning the musicians with radio censorship and perfectly reasonable moralistic hand-wringing. (We’ve considered these responses before, in the post “How Do We Hear Violent Corridos?”) If we treat these songs as pop, not pathological, phenomena, we acknowledge their complexity. We think to ask why musicians glorify narcos. What do they gain from it, commercially and musically?

Sales and streams are part of the story — in the case of Nodal’s 200+ million YouTube clicks, a very big part — but they’re never the whole story. In the whole cluster of English words that derive from the Italian popolo, think of the “pop” as standing for “populace,” not “popular.” Pop music is music whose affect can’t be separated from the impact it has on people. Not all music works on the same level of populace engagement — which is to say, not all commercially sold music is pop. One of my favorite albums of the year is Peace, by Satoko Fujii’s avant big band Orchestra Tokyo. It’s full of long, wild group improvisations and atonal mouthpiece solos; I’m guessing its audience numbers in the low thousands, and that estimate may be generous. The album has an interesting back story, but that story isn’t helpful to understanding its music, although passing familiarity with big band music and avant jazz might help listeners hear the beauty and transgressive hilarity in Fujii’s band arrangements.

As a sung and danced style, norteño’s populace engagement has a much more direct effect on its music. Purely musical joys, like La Nueva Rebelión’s virtuosic polyrhythms, get their energy from the sordid stories the singers are telling, and from narco world’s culture of oneupsmanship. Their audience gets off on the ideas of rebellion and power, of homeland and pride. And as we know from white rap fans and urban country audiences, such ideas transfer and mutate and find farflung homes, no matter how little the musicians share with their listeners.

No, you don’t need to know Spanish to dig this music. But learning about the lyrics and how the music is sold will disabuse you of any notion that this music is pure folklore. And if you’re troubled by the pathology of glorifying drug cartels, just remember — it’s music, man. If I can’t dismiss it as “just music,” neither can you dismiss it as “just sucking up to the cartels.” The pop proposition is a great BOTH/AND. There’s nothing pure about it. It’s loathsome and sublime, transcendently wallowing in the muck. One of pop music’s great gifts is to show us how to live en misa y repicando — how we can have it both ways.