It is the longstanding position of NorteñoBlog that the puro sax styles of Chihuahua and Zacatecas would improve with the addition of more terrible “sax” puns in the titles. The Zacatecan-I-think quintet Luis Ruiz y la Embarcacion de la Musica Norteña has just released their second album Pura Rienda Suelta (Goma) (alternate title: Cuidado Con La Bestia Saxy), and on first listen it stands out from the puro sax pack. Por ejemplo, accordion and sax hang out on a repetitive minor-chord riff in their single “Me Enamoré” (sequel title: “Tuvimos Saxo”). In a subgenre that’s almost oppressively chipper, minor chords count for plenty. But even on chipper tunes like Regulo Caro’s oft-covered “La Buchona” (alternate title: “Labios Saxys”), Ruiz’s clarion voice sells the songs. He’s got a way of making the most heartfelt pleas sound tossed-off. Thumbs up indeed, Sr. Ruiz.

Improbably (and not at all saxily), Los Plebes Del Rancho de Ariel Camacho are climbing closer to the Hot Latin top 10 with their single “DEL Negociante,” written by their DEL Records labelmates Revolver Cannabis. Like “Me Enamoré,” “DEL” boasts a memorable minor-key riff. Unlike “Me Enamoré,” it features the teenaged José Manuel Lopez Castro pinch hitting for previous lead singer Ariel Camacho, who died a year ago, and he’s singing a song about their label boss, Angel Del Villar. This is both crass and wonderful. After Jimi Hendrix died, imagine his rhythm section renamed themselves “Experience Hendrix,” hired the fresh-faced Neil Young as a frontman, and scored a hit with “Lonely at the Top (Reprise),” written by Randy Newman in honor of Reprise Records boss Frank Sinatra. And then they recorded a whole album! While we’ll never know the results of that particular thought experiment, we can hear Recuerden Mi Estilo (DEL), which sounds pretty good. Lopez Castro lacks the immediate charisma of his predecessor, but tubist Omar Burgos has more than enough to share. 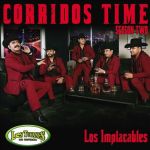 The cerveza-sodden hippies in Banda Cuisillos (aka Cuisillos de Arturo Macias) churn out good songs at an alarming pace. Dos Botellas (Mex-American) is a 10-song “EP” containing previous Picks to Click “Cerveza” and “A Goyo Le Huele el Peyoyo.” Listening to Cuisillos is a little like enduring your 12-year-old nephew during a holiday visit: he’s noisy, he describes farts in great detail, he thinks girls are gross, and he’s obsessed with showing you his endless drawings of dragons — but it sure beats hanging out with his parents and not talking politics. The Pick to Click “Andas Bien Peda” is NOT a cover of Recoditos’ breakthrough hit, nor is it as good, but it’s just as fast and Cuisillos might be singing it at their own accordion player.